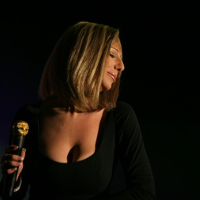 With an uncanny resemblance both in voice and looks, Sharon Owens has been performing her “Tribute to Barbra Streisand” to critical acclaim nationwide in major showrooms, for corporate events and as a Headliner in Las Vegas.  She spent ten stellar years recreating the sound and style of Streisand in the multi-million dollar productions shows “Legends in Concert” and Berlin’s “Stars in concert”.    From the classic songs of the 60’s to the power ballads of today, Sharon takes the audience on a spectacular journey through the music of Streisand’s greatest hits.  Sharon not only has the look but has the voice that is unmistakably that of the legendary Barbra.


“When Sharon took the stage, I almost fell off my chair, she was a dead ringer”- Jerry Greenburg, Former President of Atlantic Records


“Sharon Owens is the Real Deal” – In Touch Magazine


“Sharon has the look, the voice, EVERYTHING! Even the nose! I was wowed” – National Reality News Online