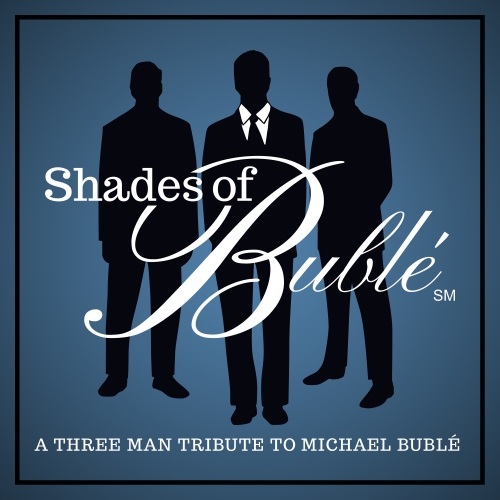 A three-man tribute to Michael Bublé

With three voices singing incredible songs like “Feeling Good,” “Moondance,” “Come Fly With Me,” “Home,” “Everything,” “Fever,” “Save the Last Dance for Me” and many more, SHADES OF BUBLÉ: A Three-Man Tribute to Michael Bublé brings the swinging standards and pop hits of Michael Bublé to the stage in an unforgettable high-energy concert event. Beginning with an amazing sold-out debut at the end of the 2014-2015 concert season, this act has already begun wowing audiences around the country with exciting harmonies, smooth choreography, and charming good looks.

Delivering a setlist comprised only of songs recorded or performed live by Michael Bublé, this world-class tribute act honors (but doesn’t imitate) the sophistication, retro style, and high-energy fun that Bublé himself brings to his concerts while engaging diehard fans with thrilling new three-part vocal arrangements. SHADES OF BUBLÉ: A Three-Man Tribute to Michael Bublé gives audiences seamless variety by combining big-band standards from the jazz era, classic hits from the 50s/60s/70s, as well as Billboard chart toppers from today in a high-energy show that generates standing ovations from sold-out crowds.