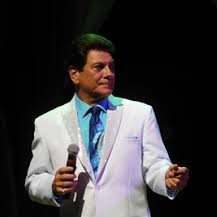 The Man of Many Voices

John Tarangelo A.K.A. “Johnny T”, was born in the Bronx, New York in 1954. Singing since he was 9 years old, his impressive tenor voice, eventually got him recognized, and by the age of 13 he was asked to join his first organized Doo Wop group. Johnny went on to join the popular 1950’s recording group The Mystics, well known for their hits “Hush-A-bye”, “Sunday Kind of Love”, and their remake of “White Cliffs of Dover. Johnny’s love of music and performing never wavered and he continued to perform with the Mystics for 15 years while also establishing a successful career on Wall Street. His singing combined with the rare video footage, as presented in his show, allows the audience to relive all of their favorite artists and fondest memories. That is why everyone who attends his performances recognizes Johnny T as “The Man of Many Voices”.