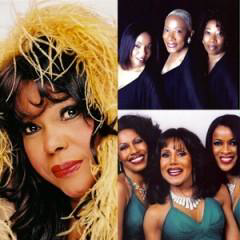 “Girls Night Out” represents music of the sixties at its best. Celebrating the songs of the Girl Groups that pay tribute to the sounds that left us with memorable number one hits! Shirley Alston Reeves ~ co-founder and original lead singer of The Shirelles ~ Contributing to the famous “Girl Group” era, the Shirelles became known throughout the world and their songs became classics. The Crystals ~ Considered one of the defining acts of the “Girl Group” era ~ The Crystals have a high energy show that keeps audiences asking for more. The Chiffons ~ With their sassy flair, trademark tight harmonies, and high-stepping confidence, the Chiffons made music that helped define the “Girl Group” sound of the era. Now, triple the memories and excitement with three groups on one stage. “Girls Night Out” is without a doubt the most energetic, uplifting and fun filled evening that will have audience members on their feet dancing in the aisles! The only question on the audience’s mind is….when are they coming back?