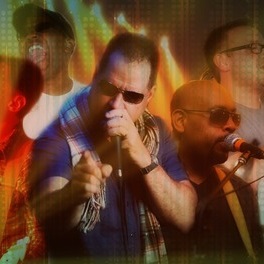 Constant audience interaction is what it's all about!

Brian Kirk & The Jirks is an all star cast of musicians that play with maturity, originality, accuracy, and pure love of the art form. Along with Brian is the incredible singing of David Pershan and Kristin Grassi, backed by thick vocal harmonies and multiple instrumentation including a 3 piece horn section. BK&J have the ability to play an extremely diverse repertoire of songs complete with killer solos and great groove. This allows the band to walk into virtually any situation and play what’s needed, whether it be rock, funk, pop, hip hop, swing, jazz, oldies, or modern songs. Whatever the style, Brian Kirk & The Jirks play it and play it well!

On top of this musical foundation is a weapon no one else has: Brian Kirk himself! With his hilarious antics and infectious personality, Brian has been gaining fans for almost 20 years! Constant audience interaction is what it’s all about with him and this sets Brian apart from most front men. Another unique technique he uses is not writing a set list. Instead Brian calls songs based on the crowd in front of him and more importantly from requests he gets. Fans are treated more like friends and not just spectators. The audience is part of the show and this allows a stronger bond between the band and its fans.